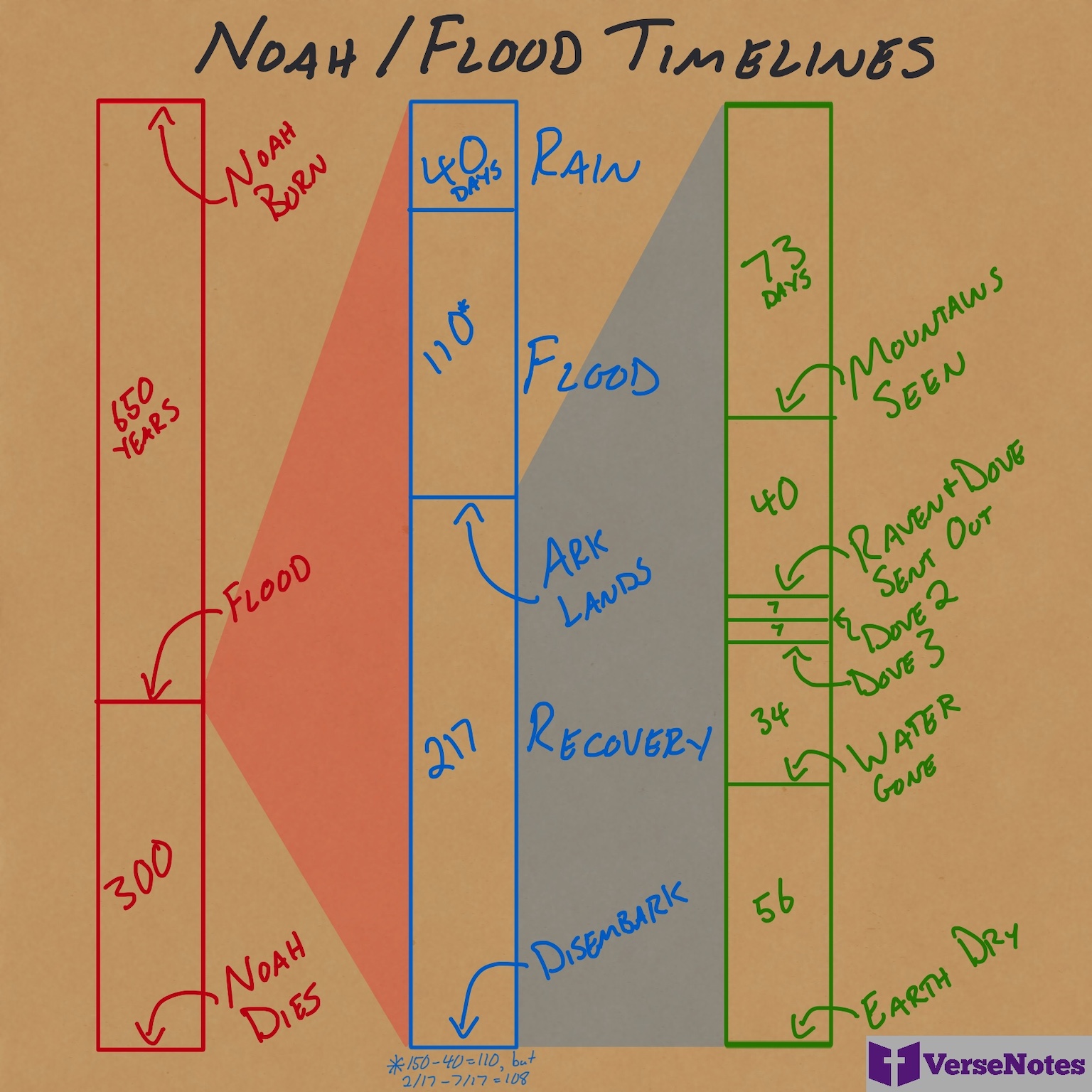 Timeline of Noah’s life and the flood.

Archaeologists, theologians, skeptics, historians, charlatans, and scholars of all kinds have attempted to nail down the reality of Noah’s flood: did it really happen? If it did, when? and where? Is Noah’s flood the same as all the other ancient stories of floods? If not, where did all these flood stories come from? If there really was a flood, what does it mean for the rest of those stories?

I’m not going to answer any of those questions today. I’m not even going to ask them.

Today, we’re going to figure out just what Genesis has to say about Noah’s life and the flood.

The Old Testament presents amazing detail in its stories, even the prehistoric ones that were passed down orally for untold centuries before someone—Moses?—wrote them down. Even the oldest chapters give us hard facts, not handwaves.

Every child knows the basic story of Noah: people were bad, except Noah; God told Noah to build an ark, which is a boat; he does; God sends a massive flood where it rains for forty days and nights; there’s something about a dove; Noah gets out of the ark, and God tells him and his family to “be fruitful and multiply.” Then there’s a rainbow, a promise—the Noahic covenant, the second covenant of the Bible.

All we’re going to do today is write that down. Ready?

The story starts back in Genesis 6, right after a confusing passage about “the sons of God” and “the daughters of men” and ancient giants called Nephilim.

God sees that, after all these centuries since Adam and Eve disobeyed him and ate the fruit and He kicked them out of the Garden of Eden, it’s been kind of a downward spiral. In fact, people’s thoughts were “only evil all the time” (Genesis 6:5). Rough.

So Noah builds an ark and gathers the animals and, in Genesis 7:6, the timeline starts.

Let’s do Noah first. He’s by far the easiest, and the entire flood happens within his lifetime, so starting with him means we’ll start with the big picture and then zoom in.

Seems simple enough, right? It’s even kind of nice that Noah’s entire life happens in four chapters and that his birth and death are verses 28 and 29 of their respective chapters. (No, verse numbers aren’t divinely inspired. It’s still nice.)

But right away we have problems.

One solution here is that Noah was in fact six hundred years old when the flood started, and he died before his 951st birthday, and the oral histories accurately captured that nuance.

Of course, if you went and read Genesis 5 when I linked to it, you know that there are few round numbers there: Seth lives 807 years after Enosh is born; Jared lives 162 years before Enoch is born; Noah himself is born when Lamech is 182 years old!

So maybe my theory isn’t so good after all.

Anyway, we have an off-by-one error already, and we’re still playing on easy mode. Let’s look at the flood.

The flood, as promised, lasts about a year. The author kind of flip-flops back and forth between providing exact dates for events and counting the days between events, so we have to fill in some blanks. I’ll do my best.

In this table, the Date column refers to the Hebrew calendar, which is necessary for computing these days. In my notation, 2.17 means the seventeenth day of the second month.

The important fact is that this calendar follows the lunar cycle. Sort of. It’s a twelve-month calendar where the months alternate between having twenty-nine and thirty days. The first month has thirty days, the second has twenty-nine, the third has thirty, etc. (A weird consequence is that, instead of using leap days like the calendar you’re probably used to, it uses entire leap months.)

We get five specific dates:

You’d think that would give us some hard dates and make our math easy, but go read Genesis 8:3–4 again:

At the end of 150 days the waters had abated, and in the seventh month, on the seventeenth day of the month, the ark came to rest on the mountains of Ararat.
—Genesis 8:3-4 ESV

I’ve seen some timelines that are off from mine by a week due to the wording of the release of the raven and the first dove. Let’s look at it:

At the end of forty days Noah opened the window of the ark that he had made and sent forth a raven. It went to and fro until the waters were dried up from the earth. Then he sent forth a dove from him, to see if the waters had subsided from the face of the ground.

He waited another seven days, and again he sent forth the dove out of the ark.
—‭‭Genesis 8:6-8,10 ESV

He sent out a raven, then a dove, and then the dove again. The question: how many days did that take?

I say seven days: he sent out the raven and the dove together. The raven didn’t come back, but the dove did. Then he sent the dove back out seven days later.

I don’t see any evidence for that. Do you?

Did you notice that some of these numbers are a bit more convenient than others?

Let’s take them one at a time.

Forty shows up all over Scripture. The flood might be the most famous—”forty days and forty nights” is an incredibly famous duration. But forty actually shows up twice in this story: it’s the duration of the rain and the time Noah waits after seeing the mountaintops before he sends out the raven.

Much later, we see forty in the number of years the Israelites spent wandering in the wilderness.

We also see forty in the life of Jesus: He spends forty days fasting in the wilderness as He begins His ministry.

There are many, many other examples.

Why does forty keep showing up? Is it some mystic parallelism? Does God just love the number forty? Maybe it’s all a big coincidence?

The answer is that it’s kind of all three. Taken separately, each instance of forty seems reasonable; it’s only when you see them all together that you realize that they all have something to do with waiting or testing. Over time, all these instances of forty, and especially the rain, made it an idiom for something that took a long time, or at least longer than you wanted it to.

Returning to this early instance, we have no reason to believe it’s anything other than an accurate count of days of rain and then days of waiting.

We already talked about this one, so I won’t belabor it, but 150 is a very convenient number. It just… doesn’t line up with the calendar.

Seven is like forty: an actual number that took on mystic meaning because God used it in important ways. The fourth commandment specifies six days of work and one day of Sabbath, for a total of seven. Whether you believe the Genesis 1 creation story is literal or not, the Exodus 20 laws are quite specific.

This number is the purpose of this whole article. I didn’t expect this number to show up when I started counting; I just wanted to get a sense of how long the flood lasted. But lo and behold, when you add the numbers up, the days from the start of the rain to the drying of the ground make exactly one solar year.

I was floored. So I started writing.

I wondered if maybe the author was just messing with us. All these random durations, the forties and sevens and fifty-sixes just happening to add up to a full year was surely invented.

But the flood starts on 2.17 and ends on 2.27, and the days in between add up correctly to a solar year.

You might remember that the Hebrew calendar has a concept of leap months, but those months are always exactly thirty days long, and we’re only ten days off. So a leap month doesn’t help us.

You might say that Genesis was written down sufficiently late in history that the Hebrews had interacted with cultures that idolized the sun and had access to astronomical predictions and accurate calendars, and they deliberately scheduled the flood for a solar year instead of a Hebrew calendar year. But Genesis was obviously written to a Hebrew audience using the Hebrew calendar, and the proper symbolism would have been to use a Hebrew year.

So I’m inclined to believe that this event really did take a year from start to finish.

These all seem like specific, actual, literal numbers to me. If you can come up with something special, significant, or convenient about them, please let me know. I’d love to hear your thoughts.

There’s no conclusion. I don’t have a grand lesson. I find delight in the Scriptures, and I share it with you.