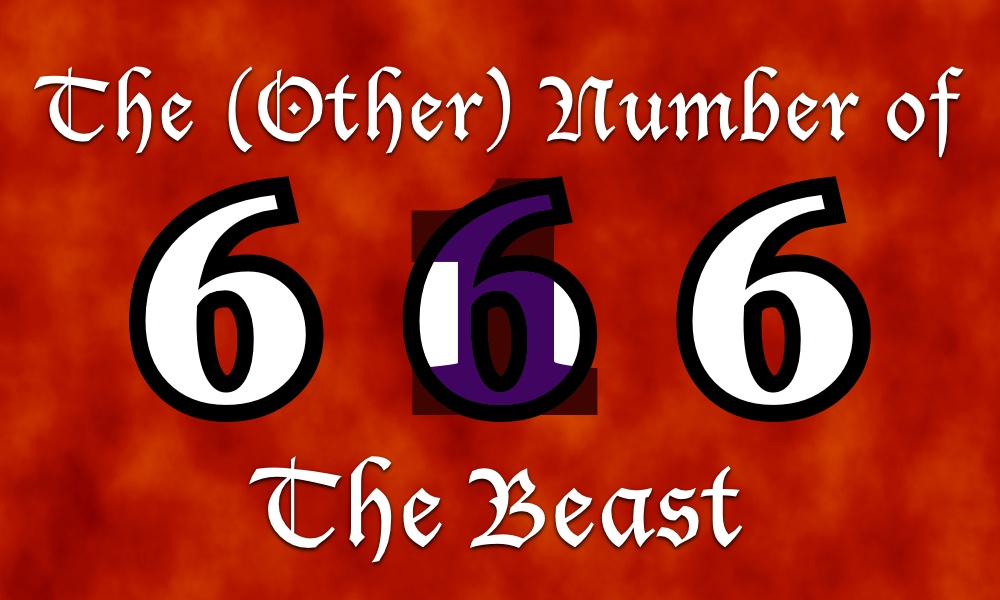 Last week’s entry in Revelation By the Numbers includes the most famous number in all of Scripture: 616, the number of the beast.

No, I’m sorry, I meant that it contains 666, the number of the beast. It’s easy to get confused; Revelation isn’t exactly the most clear book in the Bible

In Revelation 13, John describes two beasts: one that rises from the sea, and one that rises from the earth. They’re quite monstrous: the sea beast “resembled a leopard, but had feet like those of a bear and a mouth like that of a lion” (Revelation 13:2). Oh, and it had ten horns, each with a crown, and seven heads, one of which had been fatally wounded and then healed.

The earth beast is only a little less strange: “it had two horns like a lamb, but it spoke like a dragon” (Revelation 13:11).

This second beast is the subject of “the mark of the beast.” He decrees that no-one can buy or sell anything unless they get his mark on their right hand or their forehead. That mark “is the name of the beast or the number of its name.”

Okay, John, this puzzle doesn’t sound so hard: as soon as we notice a bunch of folks getting hand and forehead tattoos, we’ll just look at the tattoo and read the name. But John wants to give us some warning, so he writes Revelation 13:8,

This calls for wisdom: let the one who has understanding calculate the number of the beast, for it is the number of a man, and his number is 666.

Finally, here we are. Now, people have spent the last two millennia arguing over the meaning of this number. Does it refer to Emperor Nero of Rome? Or maybe Caligula? One of the Roman Catholic popes? Possibly a monarch of England or a U.S. president?

Nobody seems to know, although Nero is a very popular opinion. Unfortunately, a discovery from the late 1800s made it even more confusing. One of the documents, called Papyrus 115, contains a portion of the book of Revelation, but it reads 616 instead of 666. And that—Papyrus 115—is the oldest physical copy of the book of Revelation that we have, dating from the 200s AD, just a few generations after John first wrote the book.

So it must be right. Problem solved, everybody change your Bibles. Right?

While it’s not certain that this John, the author of the Gospel, is the same as John of Patmos, who wrote Revelation, it is certain that Irenaeus was plugged in to the early church in an awesome way. And Irenaeus wrote about this exact topic! Let’s see if he can help.

I do not know how it is that some have erred following the ordinary mode of speech, and have vitiated [ruined] the middle number in the name, deducting the amount of fifty from it, so that instead of six decads [tens] they will have it that there is but one.

Oh. He says—before Papyrus 115 was even created—that 616 is definitely wrong, and 666 is definitely right. He goes on to blame the mistake on copyists who weren’t paying attention. What this tells me is that the 616/666 problem is not new, but very ancient. And a guy—a bishop—who lived through it the first time affirms that 666, which most of us thought was the right number anyway, is in fact correct.

Now we can go back to arguing over which leader the number refers to.