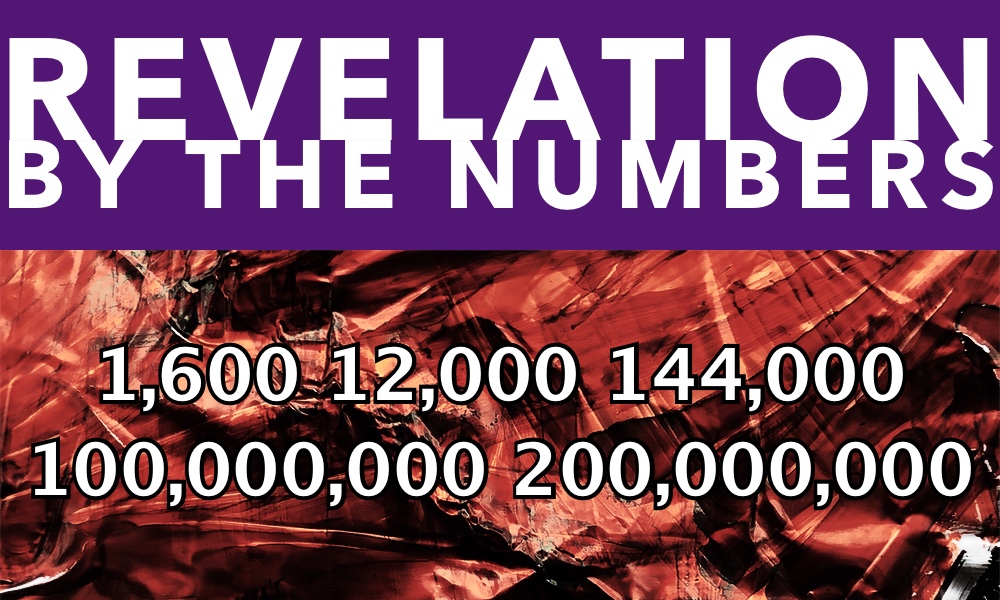 This post is part of the series “Revelation by the Numbers”

You can read all these entries in order, or feel free to skip around.

Our first number: 2,000. That’s how many years theologians have been disagreeing wildly about the meaning of the visions in Revelation, primarily based on a disagreement about the timeline of the events described. Briefly, here are the major views:

My interpretations tend toward the futurist view for two reasons: first, the concrete interpretation of symbols in Scripture is fraught with danger unless we have a heavenly guide. Indeed, every attempt to attach every symbol of Revelation to a historical event results in making excuses for why the numbers don’t always work out perfectly (for example, try to find a definitive list of the 7 kings represented by the beast’s 7 heads in Revelation 17).

And second, the futurist view is sufficiently vague that it can mostly be applied to the preterist or historicist views with little alteration. That means that talking about most of Revelation from a futurist viewpoint covers the most ground. For example, there’s a beast in Revelation 13 that is clearly some sort of king or emperor. A preterist might say it stands for Nero Caesar. A historicist may say it stands for the Roman Empire or a Roman Catholic pope. A futurist would say it stands for some unknown ruler, which includes both of the other options. Therefore, by generally aligning with this view, we can study Revelation without blinding ourselves to other possibilities.

This viewpoint—the futurist one—may not be correct. As with all study of Scripture, you should do your own work and cover it in prayer. And as always, feel free to contact me if you have comments or questions.

This is gross. We’ve seen all these images before: the second reaping, the trampling of the grapes in the winepress of God’s wrath; the flowing blood. Now John tells us just how much there is.

And the winepress was trodden outside the city, and blood flowed from the winepress, as high as a horse’s bridle, for 1,600 stadia.
—Revelation 14:20

Grapes and wine show up often in Scripture as symbols for blood. Perhaps the most well-known is Jesus’s institution of the sacrament of communion at the Last Supper:

And likewise the cup after they had eaten, saying, “This cup that is poured out for you is the new covenant in my blood.”
—Luke 22:20

The wine stands for the blood of Christ, shed for the wrath of God, bled in our place for our sins. This image isn’t new, though; Jeremiah speaks of it as well:

Thus the LORD, the God of Israel, said to me: “Take from my hand this cup of the wine of wrath, and make all the nations to whom I send you drink it. They shall drink and stagger and be crazed because of the sword that I am sending among them.”
—Jeremiah 25:15-16

And here in Revelation we see again a vivid image of grapes and wrath and blood.

When Ezekiel saw a river, in Ezekiel 47, it was the river of the water of life flowing from the throne of God in the temple. John’s river is the blood of unbelievers. Ezekiel’s river got bigger as it flowed: after 4,000 cubits (just over a mile), it was too high to wade across. John’s river starts at a winepress and flows at an incredible depth.

The wrath of God is swift. It is complete. And many who did not hear the gospel of Christ or believe in the name of Jesus will be caught in it.

Before the seventh seal is opened; before the 4 angels at the 4 corners of the earth let loose their winds of destruction; before the 7 trumpet judgments; God seals His servants and protects them from harm.

The servants come from every tribe—12,000 from each of the tribes of Israel. The tribes are significantly varying sizes, so it’s unlikely that this number is literal. Instead, 12,000 most likely refers to 12 as a complete number and 1,000 as a large indefinite number. John is probably telling us that every servant of God, regardless of his origin, is counted in the saved multitude. Almost all theologians agree that this counting represents the entire church—it’s the nature of that church about which they disagree.

It is clear that, whatever their earthly identity, these are God’s chosen people who “take up the whole armor of God, that [they] may be able to withstand in the evil day, and having done all, to stand firm” (Ephesians 6:13).

We have already looked at this insane city, with its 12 foundations and 12 gates and 144-cubit-high wall over which its buildings tower. Here we come to the actual measurement of the New Jerusalem, the City of God.

It’s a cube, just as the holy of holies in the tabernacle and later in the temple was a cube. This shape in Scripture always puts us on the lookout for the presence of God. And sure enough, God is in the city:

And the city has no need of sun or moon to shine on it, for the glory of God gives it light, and its lamp is the Lamb.
—Revelation 21:23

Let’s briefly consider the scale of this city. It’s 12,000 stadia on each side, which is about 1.9 million square miles, or 50% larger than India. If it had the population density of India, it could hold 2 billion people. But India is not very built up; like almost every other country, it has only a few large cities with tall buildings. If this city had the density of, say, Delhi, it could hold 54,000,000,000 people, about half of those who have ever lived. But even Delhi isn’t that tall; its largest apartment buildings do not even reach 600 feet. (To be fair, these are enormous apartment buildings.)

If this size seems ludicrous, consider that 12,000 is a highly symbolic number, too, including both 12 and 1,000. Taking 12 as meaning “complete” and 1,000 as meaning “a lot,” we may infer that the city is simply gigantic, as big or bigger than it needs to be to comfortably hold the whole church of Christ in perfect harmony with each other and with their Creator.

If you seal 12,000 servants from each of 12 tribes of Israel, you get to 144,000 very quickly (Revelation 7:4). The simplest interpretation of this number is exactly that: it’s the result of some basic math.

Another possibility is that 144 is like 24: a combination of 2 twelves. If those 2 twelves, as we have considered before, represent the Old and New Testaments, then 144,000 represent the entirety of the church, both the ancient saints like Abraham and Moses and Elijah, and the new ones like James and Peter and Paul and all those who have lived since.

How many angels does God have? Jesus, when He is arrested, casually comments that He could simply ask, and God would send “more than twelve legions of angels” (Matthew 26:53). That’s between 36,000 and 64,000 angels, depending on which “legion” He’s talking about, which seems like a lot.

John laughs at that number. As he stands in the throne room of Heaven, in awe at the throne and the living creatures and the elders and the Lamb, he hears the voices of angels worshiping, “numbering myriads of myriads and thousands of thousands” (Revelation 5:11). While “myriad” in modern English mostly causes grammatical headaches, in ancient Greece it stood for 10,000. John is speaking of hundreds of millions of angels. Which is a lot “more than twelve legions”.

But even as large as it is, there is a precedent for this ridiculous number. Daniel writes also of the throne room of heaven, although he uses poetry instead of prose:

The worship choir of heaven is unimaginably huge. In fact, surely John didn’t know how many angels there were; surely he didn’t count, but instead turned from the throne and saw an infinite heavenly vista of angels crying out in worship of the Lamb who is worthy to open the scroll.

After that magnificent crowd of angels, the reader might think, “Well, that was huge; John sure saw a lot of angels, but I bet he wasn’t really keeping track.”

But when the sixth trumpet releases the 4 angels bound at the Euphrates to gather an army, John hears an exact count of their cavalry: “twice ten thousand times ten thousand” (Revelation 9:16). No army, even in 2019, could defend against these troops. Not only do they breathe fire and smoke and sulfur, but there are just so many of them.

The judgment of the Lord is inescapable; only those with the seal of God have any hope at all.

We have just seen John use the numbers 100,000,000 and 200,000,000. He described a city of incomprehensible size. And yet, as he surveys the millions upon millions of singing angels, he notices another crowd: the saints themselves:

After this I looked, and behold, a great multitude that no one could number, from every nation, from all tribes and peoples and languages, standing before the throne and before the Lamb, clothed in white robes, with palm branches in their hands
—Revelation 7:9

Not only could John not count them, but he claims “no one could.”

From a purely numerical standpoint, this description makes sense. John is looking at hundreds of millions of angels, but over the course of history, how many believers have died? Obviously, God only knows, but the number could easily be in the billions, dwarfing the ocean of angels with the company of Christ.

But aesthetically, this vision must have been ecstatically beautiful. Note the progression of values: 1 throne, then 4 creatures, then 24 elders, then 100,000,000 angels, then billions and billions of singing, shouting, screaming Jesus freaks waving palm branches and welcoming their king, the Lamb, into His city, the New Jerusalem, to rule on high and reign with His servants for ever and ever.

When John’s vision is our vision, we will plead, I suspect, in accordance with the hymnist: “O! For a thousand tongues to sing.”

We have reached the end of our series! There are no more numbers in Revelation to be conquered. If you missed any, you can start at the beginning or scroll back to the top and choose from the list of posts there.

This post is part of the series “Revelation by the Numbers”